” Remember that in the five-wave move only one impulse wave will be extended (one, three or five). “

If an extension is seen in wave three, waves one and five look equal in length. As a rule, sub-wave three within wave three usually marks the center of wave three’s movement. If you witness a series of converging waves where no triangles are expected, then it is an extension. About 60% of all extensions take place in wave three. Thirty-five percent of cases are extended wave five and only 5% of cases are extended wave one. If wave one is extended, the next correction target will unfold in the area of wave two, not usual wave four.

” Corrections within extensions are usually weaker. “

The standard retracement ratio to the preceding wave makes up 23.6%; and seldom, 38.2%. If wave two retraces less than 50% of wave one, extended wave three is on the cards. If wave five is extended in the five-wave move, then there is an 80% possibility that this cycle is wave three in a higher degree. If an extension develops in wave five, the wave’s length is 1.618 times higher than the distance between the beginning of wave one and the peak of wave three. Take a look at the picture below. 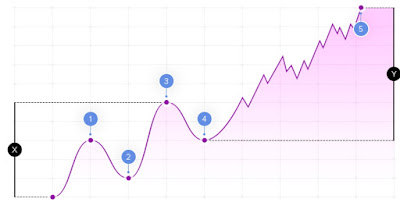 ” The double three is considered the most complicated combination. “

Double threes rarely occur at scales higher than hourly or ten-minute ones. If a correction begins with a complicated sideways pattern (flat correction or triangle), the retracement makes up not more than 38.2%; or seldom, 50%. This is true even for corrective wave two. The correction within 38.2% retracement of the previous movement indicates a moderate dominant trend, while a correction requiring some time to end leads to a sharp movement seen after the completion of the correction. Retracements of 61.8% take place in wave five more often than 50% ones. However, 50% retracements often happen in wave B within a zigzag. The completed zigzag does not mean that the whole correction came to an end as retracements can include complicated patterns.

” However, Elliott said that usually the simplest structures turn out to be the right answer. “

” Neither the Wave principle nor Fibo ratios will help you find the points where wave two will end. “

You could only define average levels to place stop orders. That is why you should better not trade in wave two. As a rule, wave two is simple (zigzag, double zigzag), while wave four is complex (flat correction, irregular correction, triangles, double or triple threes, etc.). Retracement in wave two is usually deeper than in wave four. Wave two tends to retrace 61.8% or more of wave one (if this does not happen, than 50% retracement is likely to develop). Traditionally, wave four retraces 38.2% of wave three. 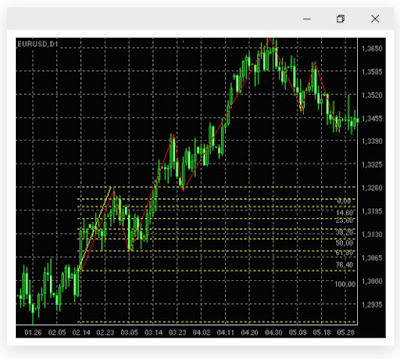 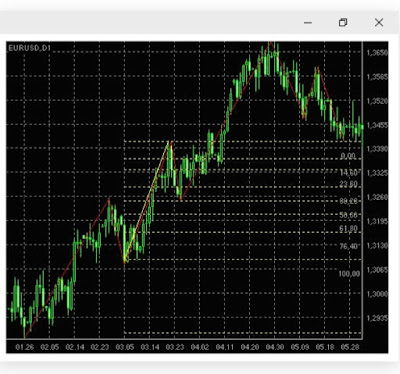 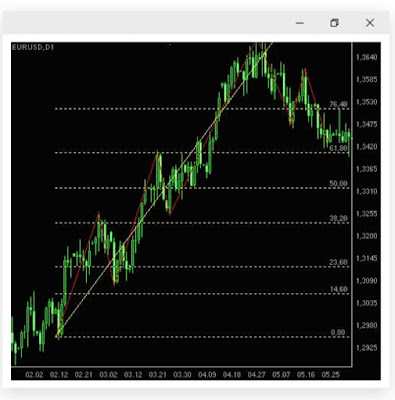 A completed cycle of the Elliott wave, where the impulse five-sub-wave move is corrected by the three-wave pattern (three) represented by a zigzag. The correction ends at 61.8% Fibonacci ratio.

” Often, after a sharp surge or slump, a price retraces most (or even the whole) of its previous movement. “

As a result, the price faces support/resistance at Fibonacci retracement or near it.

Understanding Fibonacci ratios:
In most cases, the first retracement ratio (23.6%) is marginal. The next ratio (38.2%) is relevant as the market often retraces from it. If the market rebound continues, the next important consolidation rate will become 50%. If the retracement continues to 61.8%, it may signal the end of the previous trend. 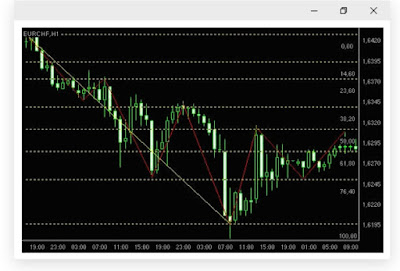 A complete cycle of the Elliott wave with Fibonacci lines is shown on the EUR/CHF chart. 23.6%, 38.2%, 50%, and 61.8% Fibo ratios are important levels pointing to possible changes in the price dynamic.