Before we proceed to specific types of trend-following indicators, let us make sure that you fully understand what a trend is.

” The traditional definition states that a market trend is a sustainable price movement in a certain direction. “

There are three types of trends: bullish (uptrend – prices are rising), bearish (downtrend – prices are falling), and sideways (horizontal – prices are stuck in a narrow trading range, hovering up and down with no clear direction). Therefore, trend-following indicators are designed to determine the current market trend and predict changes in the direction of price movement. As a rule, trend-following indicators are highly accurate in locating the point where a trend starts, ends, or reverses. Nowadays, hardly any trader in the currency market can do without these helpful technical tools. In fact, most market participants commonly use more than one trading indicator, seeking to achieve higher accuracy. 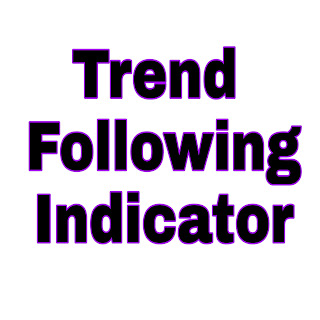 ” Trend-following indicators start identifying a trend after they have been added to the price chart. “

Remember that the process usually involves a certain time lag. Still, using this type of indicators makes it possible to avoid common errors and false signals that can undermine a trader’s success.

At present there exists a tremendous amount of trading indicators designed specifically for the currency market. Many of them are already available in most trading platforms, which means that these tools enjoy the greatest popularity among market participants. However, there are also some indicators that are not that widely recognized and are only used by traders who are well familiar with their functions and operating principles. Some traders also create their own unique expert advisors to suit their personal needs and trading style. Such customized indicators sometimes gain popularity on a wider scale and become widespread.

To achieve efficient and profitable trading based on trend-following indicators, a trader does not necessarily have to test as many technical systems as possible. The use of two or three expert advisors combined with sufficient knowledge and trading skills would be enough to bring positive results.

Below we will describe several basic trend-following indicators in more detail.

The moving average (MA) is the most frequently used indicator in technical analysis. Moving average lines are added directly to the chart reflecting price movements. A moving average is calculated over a certain time period selected by a trader. The shorter this period is, the higher the probability of getting false signals is. At the same time, longer periods imply a weaker sensitivity of the moving average.

There are different types of moving averages such as

Moving averages belong to the category of analytical tools following the trend. They are intended to signal a potential trend reversal and spot the beginning of a new trend and the end of an existing one. Therefore, MAs track the process of trend development. They can be considered curved trend lines. However, a moving average is unable to forecast price shifts in the same way as graphical analysis can predict market dynamics. Instead of running ahead of price movements, it follows behind their dynamics over time. MAs can only indicate the formation of a new trend after (not before) it actually emerged.

Building a moving average is an effective technique for spotting and measuring trends by smoothing price values.

Indeed, after higher and lower price deviations have been smoothed out to average values thus filtering out the noise from random fluctuations and flattening the curve, it is much easier for a chartist to monitor the development of present market trends.

A short-term moving average provides more accurate results in tracking price movements than long-term MAs. Time lags can be reduced through the use of shorter time frames but still cannot be eliminated completely. Short-term moving averages work best in a sideways market. Longer-term MAs are preferred in a trending (bullish or bearish) market as they are less sensitive.

A simple (arithmetic) moving average (SMA) is calculated as follows: 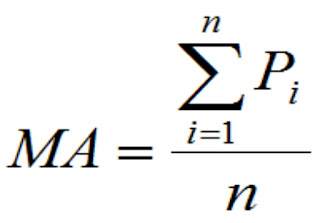 where Рi is the closing prices of day i, and n is the period.

This type of moving averages is widely used by most technical analysts. However, some chartists are skeptical about it, citing two main reasons to doubt the efficiency of SMAs.

First, SMA analysis only takes into account the data contained within the period covered by an SMA.

Meanwhile, some experts argue that more weight should be attributed to more recent price data. This probably makes sense because it takes longer for a simple moving average to signal a reversal whenever a new trend emerges than in the case of the weighted moving average, which we will discuss below.

” Some technicians use weighted moving averages (WMA) to solve the problems related to average day values. “

The following formula is used to calculate the WMA: 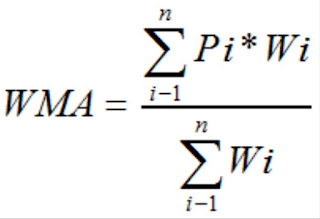 where Wi is the weight of component i (price).

The weight assigned to prices in the formula above can be selected by a trader depending on the price dynamic of the asset being traded. There are several techniques for smoothing out a series of prices including linear and exponential weighted moving averages. For example, in the case of a linear weighted moving average, Wi (weight) equals i (price).

The exponential moving average (EMA) has a more complex structure than the WMA or SMA, making it harder to calculate. It allows a chartist to fix the two weaknesses of a simple moving average.

First, the EMA assigns more significance to recent days’ prices. That is why it is also called exponentially weighted. Even though previous price dynamics has smaller weight, all of the price data is used to calculate an exponential moving average. In this case, the formula looks somewhat more complicated:

Even though the exponential moving average does not have the drawbacks of a simple MA, it is not the most efficient tool out of all the three types we have described. Below we will discuss the effectiveness of each MA type.