” In a broad sense, an oscillator is anything that moves back and forth (oscillates) from one extreme (maximum or minimum, high or low) to another, and back. It always operates in one of two states, i.e. either on or off. “

On Forex, oscillators represent technical tools that measure the difference between two specific points on a price chart. An oscillator appears as a wavy line that moves lower and higher between two extremes. This indicator serves as a signal to buy or sell an asset. It is also used to determine when a currency pair has reached an overbought or oversold condition. Forex oscillators can range on a scale from 0 to 100. Analysis thus depends on these scale readings. The market is interpreted as being in an overbought area when an oscillator rises above 70 or 80. Values below 20 or 30 denote an oversold condition. Moreover, some oscillators also have a middle (zero) line separating the upper and lower halves of the range. The crossing of the middle line is considered to constitute a buy or sell signal indicating an upcoming trend reversal.

” There are various types of oscillators applied in technical analysis. We recommend using those that allow a trader to assess the situation and take the proper decision quickly. “

Among the most common and frequently used oscillator tools are the Stochastic Oscillator, Relative Strength Index (RSI), Percent Range (%R), Moving Average Convergence/Divergence Oscillator (MACD), Commodity Channel Index (CCI), and Momentum. Stochastic oscillators compare the most recent closing price to the price range between its high and low over a certain time period. The RSI identifies trend strength and indicates potential reversals. The Williams’ Percent Range, developed by famous commodity trader Larry Williams, shows when a currency pair is overbought or oversold depending on the current price as compared to its range over the previous periods. The MACD is based on the analysis of moving averages and serves to determine a trend’s direction. The CCI was initially intended for identifying trend reversal points on the commodity market but later became popular on Forex, too. The Momentum oscillator, invented by technical analyst Tushar Chande, measures the speed of price change.

Keep in mind that oscillators are not infallible as they may sometimes give false signals. Therefore, a trader should use caution when applying this type of technical indicators. Beginners are not advised to start their charting experience with oscillators. 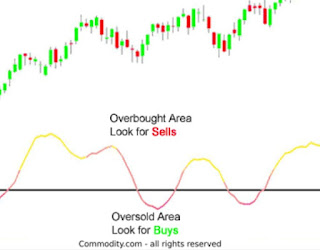