” The Momentum oscillator measures the price change over a certain time period. “ 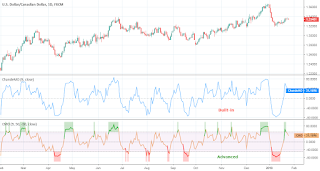 It is calculated according to the following formula:

Rate of Change (ROC) is the second simplest application of oscillator techniques. As well as the Momentum indicator, it displays the difference between today’s price and the price x-time periods ago. There is only one significant difference between the ROC and Momentum as the latter is expressed as a ratio rather than as a differential. The Rate of Change formula looks as follows:

where Рt is today’s closing price.

Рх is the closing price x days ago.

The Momentum and Rate of Change look almost identical when plotted on a price chart and are applied in a similar manner. The difference lies in the scale of measurement. As a rule, the ROC mid-point line is 50 (instead of a zero line), and the indicator fluctuates below and above 50 instead of 0, so there are no negative values. The Momentum and ROC are important signals measuring trend acceleration, i.e. whether the trend picks up speed or slows down. These tools act as leading indicators, reaching the highest level ahead of the trend and falling to the lowest mark before prices hit the bottom. As long as oscillators are moving towards new highs, a trader can stay long. When an oscillator reaches a higher peak, it signals that the bullish trend gains pace and is likely to stay on an upward path. After a lower high has been exceeded, the bullish trend loses steam, so a trader should prepare for a reversal. The same is true for lows in a bearish trend. The oscillators that we have discussed above involve the same drawback as simple MAs. They react to each day’s price data twice: first when they enter the window, and then when they leave it.

” When these oscillators reach a new high, indicating increasing pessimism in the market, prices are most likely to continue an upward movement. “

If prices are rising while the values of oscillators are declining, this shows an upcoming price peak, so it is time to cash in profit from long positions and get ready for a reversal, and vice versa for a bearish trend.

When dealing with leading indicators, a trader should use caution and keep in mind the following recommendations:

An oscillator is said to be in an overbought condition when it reaches a higher level compared with its previous values. Overbought means that the market has gone up too far and the oscillator is ready to turn downwards.

” Overbought is a market condition when bulls are either unwilling or no longer able to buy, so they cannot push prices any higher. “

This is a relatively calm period in the market, with no clear bullish direction in prices. As bulls fail to push the price to a new level, and the price action n days ago (i.e. within the period where we take the price from, serving as a midpoint for oscillator calculation) has an upward slope, the oscillator reverses down and, after a while, breaks the overbought barrier. In such a way, most oscillators signal weaker bullish pressure and an upcoming trend reversal. An oversold condition occurs when an oscillator reaches a lower level compared with its previous values. In this case, the oscillator is ready for an upturn.

Overbought and oversold levels are marked with horizontal reference lines on a price chart. They are drawn in such a way that an oscillator spends no more than 5 percent of total time beyond each of these lines. These reference lines should only run across the highest peaks and the lowest dips of an oscillator for the past six months. These lines should be readjusted every three months.

As well as some of the technical tools we have discussed above, oscillators generate the most reliable signals when there is a certain discrepancy (i.e. divergence) between indicators and prices. A bullish (positive) divergence occurs when prices soar to a new high while the indicator traces a lower low. This situation means that prices are rising out of inertia, and bulls are losing control. The opposite is true for a bearish (negative) divergence. Keep in mind that triple divergences, though rare, may also occur in oscillators.

There are three main ways to use the Momentum oscillator: 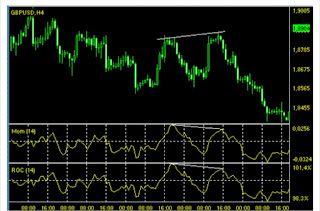 The Momentum and ROC function in a similar way, signaling a potential change of the trend direction after reaching the upper boundaries of the time frame.