” The Moving Average Convergence/Divergence (MACD) is a dynamic trend-following indicator reflecting the relationship between two moving averages of prices. “

To calculate the histogram (the divergence between the MACD and the signal line), subtract the value of a 26-period exponential moving average from a 12-period EMA. Then subtract a 9-period EMA of the MACD (the signal line) from the result.

The efficiency of this method has made the MACD indicator extremely popular and widely-used among technical analysts.

The MACD demonstrates the most reliable results on a time scale of one day or more. Be careful when applying MACDs on charts shorter than one day. As for smaller time frames, the performance of MACDs on less-than-an-hour charts may involve a lot of false signals.

” MACDs prove more effective when the market fluctuates in a wide trading range. “

The most popular MACD signals include crossovers, overbought/oversold conditions, and divergences.

Below we will describe three possible applications of MACDs.

Buy signals are generated when the histogram crosses the zero line from below, and vice versa for sell signals. Be aware that in most cases mechanical trading with every MACD crossover results in frequent whipsaws and significant losses. The best idea would be to avoid narrow trading ranges that undermine the effectiveness of the indicator. Open a long position when a buy order is generated around the zero line. In most cases, such a signal is preceded by a strong bullish trend. If the signal is generated well below the zero line, it means that the trend will be extremely weak. You can also obtain additional information when analyzing an MACD histogram. If a price bar is well above the zero level, and each consecutive bar is smaller than the previous one, momentum becomes weaker. When displaying the Momentum indicator, the histogram gives earlier signals.

Divergences represent the second way to use MACDs. The divergence is a very effective pattern for most types of technical analysis, and the MACD is no exception in this case. A divergence occurs when prices and MACD lines are moving in opposite direction. Divergences are most helpful in identifying a trend continuation rather than a potential trend reversal. In any case, it is best not to hurry but to wait for a full divergence to establish on the chart before entering the market. Otherwise you will find yourself on the opposite side of a strong trend.

One more way to use the MACD is to identify whether the market is overbought or oversold (or neither). This tool allows a trader to determine the turning points where the market is likely to reverse with a certain degree of probability. If the MACD reaches extreme highs or lows on the opposite sides of the zero line, it means that the market is in an overbought or oversold condition. Considering this type of signals, one needs to determine these extreme points empirically as they would be different for each trading instrument. When the histogram reaches these critical areas, any crossing with the signal line generates a buy/sell signal. Crossovers that occur before the price reaches extreme levels may be ignored, thus eliminating most whipsaws. Based on a small research, such levels can be identified in any market that is in a broad trading range with wide price fluctuations. Signals that occur in the middle area of the MACD chart should be taken into account only if another trusted indicator confirms that the price will be moving in the direction of the trend. Of course, this may be determined by an oscillator. Remember that the MACD works best as a long-term trend-following tool rather than a short-term market timer for trading purposes. 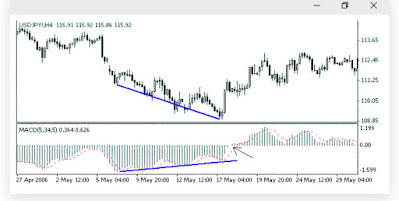 The bullish divergence on the MACD chart warns of a possible change in the trend direction. The break of the zero line gives a buy signal.