The next channel type is a linear regression channel. It consists of two parallel lines that are equidistant from the trend line in opposite directions. 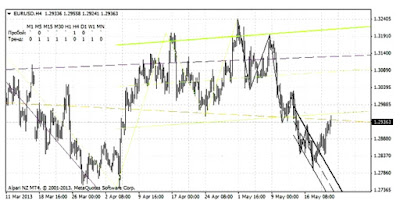 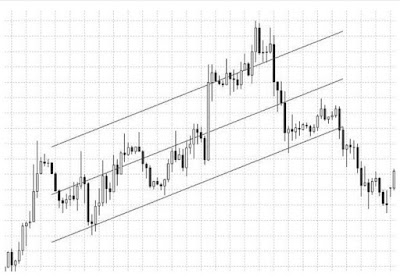 In this case, this distance is equal to standard price deviation from the regression line.
” When working with forex channels, keep in mind that rebounds, breaches and retests may occur quite frequently. Take them into account in order to make a reliable price movement forecast. “
A rebound from a channel line occurs when the price touches a channel line at least four times and then reverses into the channel. In the case of a channel break, the price approaches a channel line from within, and the candle closes beyond the channel. A channel line retest means that the price returns to the earlier breached line, looking to retest it. Following successful retesting, the price pulls away from the channel line and prepares to break the channel.
The major upward trend line can be used for opening subsequent long positions. The channel line serves as a price target for profit-taking in short-term operations. If you consider yourself a risk taker, you can try and use the channel line to open a short position in the direction opposite to the major trend. However, be aware that countertrend trading strategies involve serious risks and often result in heavy losses.
Just as in the example with the major trend line above, the longer the channel length is and the more testing points confirm its existence, the more important and reliable this channel becomes.
” The break of a major trend line always indicates the possibility of further changes in the trend direction. “
At the same time, breaches of an upward channel line, conversely, point to an acceleration of the existing trend. Many traders tend to regard the break of an upper line in a rising trend as a signal to open more long positions. 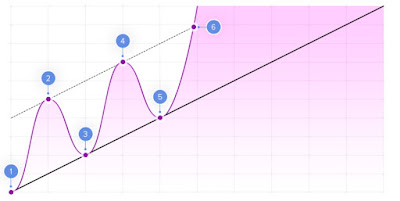 Break through of the rising trend line in the point 6.
A channel may also be used to assess the strength of a trend. If price fluctuations failed to touch the upper channel boundary (point 5), a trader should view this as a sign of an upcoming trend reversal. It is only a probability at this point. However, there is a solid chance that the second line (the major upward trend line) will also be breached. Practice shows that if price fluctuations within an established channel failed to reach one of its boundaries, the trend is about to reverse. This, in turn, means that the opposite side of the channel is most likely to be broken in the short-term. 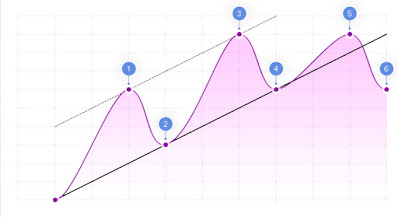 If the price adjustments can not reach the upper channel bound – this is the first sign of that the bottom edge will be digged through soon. Pay attention to that after a failed effort to increase to the upper bound level (point 5) follows a break through of the main upside trend line (point 6).
” One more way to use channels is to adjust a trend line. “
If prices moved far beyond the upper channel boundary, it means that the trend is gathering momentum. If that is the case, most technicians build a steeper major upward trend line. This line starts from the latest low and extends upwards, parallel to the new channel line. It often happens that a steeper support line is more efficient than the old, flatter line. The same holds true for the opposite picture. For example, a price peak failed to touch the upper boundary of a channel in a rising trend. This is when you need to draw another support line from the last dip parallel to the new resistance line, joining the last two peaks.
Channel lines could be a useful tool in determining price targets. Following a break beyond the existing price channel, prices typically cover a distance equal to the width of the channel. Therefore, a trader simply needs to measure channel width and then extend (project) this amount from the point where some trend line was breached. 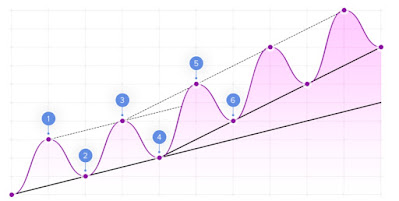 After a break through of the upper channel boundary (wave 5) the most analysts shape up a new growing trend line, paralleled to the new top channel line. Put it differently, the line 4-6 is traced out in parallel to the line 3-5. As the upward direction dynamics gathers its pace, small wonder that the main upside trend line is to be sharper. 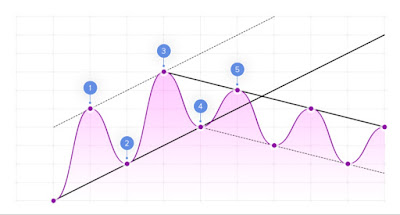 If the prices do not manage to amount to the upper channel bound and the descending trend line is traced through two sequent down-going peaks (line 3-5), then it is possible to construct a probationary channel line. It will take its rise from the fall point 4 alongside with the lines 3-5. At times, this ground channel line is employed as an initial support level for the new tendency.
Remember that out of these two lines, the major line is more important and trustworthy. The channel line plays here the secondary role. However, the use of channel lines may often be efficient for trading purposes. Therefore, we can conclude that this tool holds its rightful place in a technician’s arsenal.