Channels are used in technical analysis along with other tools in order to predict future price movements and determine the best entry points for selling or buying an asset. A channel line, as well as a trend line, reflects potential support and resistance areas.

Drawing forex channels is a relatively simple practice. When we deal with a rising trend, first we need to build a major upward trend line, joining all price lows. Next, draw a dotted line parallel to the major line. The latter will move through the first significant peak (point 2). Both lines are directed bottom-up from left to right, forming a channel. If prices reach the channel line in an upcoming rising trend, then rebound from it and head lower again, the channel may actually exist (point 4). If prices hit the original trend line at their low (point 5), then the probability of channel existence increases. The same (in the opposite direction) may also be applied to a downtrend. 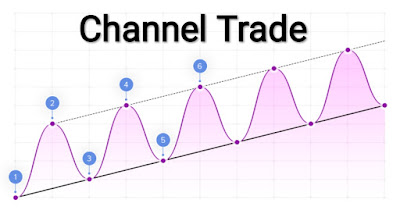 Example of a trend channel. After at the graph will be depicted the main mounting trend line (through the points 1 and 3), you may map the channel line or the reversal line (dashed line). It will stretch in parallel to the major growing trend line through the first peak point 2. 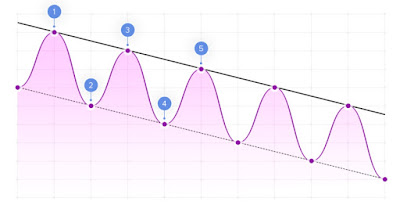 Trend channel in the course of descending movement. The channel line is projected down and passes through the first drop point (point 2) along with the down moving trend line marked out through the spike points 1 and 3. The price fluctuations often take place within a similar trend line. 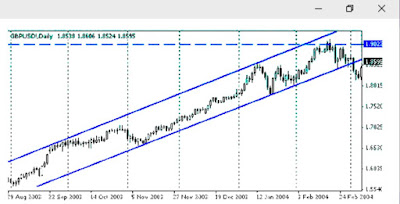 Draw attention to the way how the up-directed motion fits well between the parallel trend lines. The main upward trend lines (bottom lines) are always more essential. Nevertheless, the channel lines in the headward course can help to determine the upper resistance bound.

” There are several types of forex channels, with different techniques for drawing and analyzing technical data. The most popular and simple among those is an equidistant channel. “ 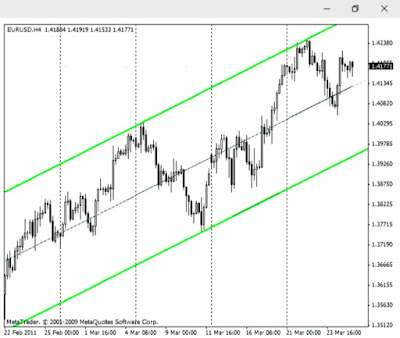 To draw it, you only need to locate three points on a chart. For support area, these would include two local highs and one low between them. The opposite is true for resistance: two local lows and one high.

Another type of forex channels that is frequently used by chartists is a Fibonacci channel.

It is constituted by an entire system of parallel trend lines. Two of them are based on the same principle as equidistant channels. The others are built according to Fibonacci proportions: 61.8%, 161.8%, 200%, 261.8% etc.