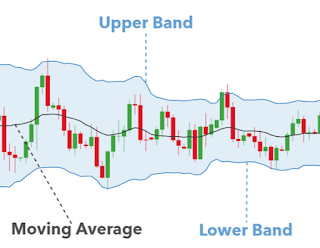 ” Since the standard deviation value depends on volatility, Bollinger bands are self-adjusting: widening when the market is volatile and narrowing during more stable periods. “

As a rule, these patterns are built on a price chart but can also be displayed on an indicator chart. Below we will focus on the bands that are plotted on price charts. Similar to the case with moving average envelopes, the interpretation of Bollinger bands is based on the fact that prices tend to stay within the upper and lower boundaries of a band.

” The distinctive feature of Bollinger bands is their varying width that depends on shifts in price volatility. “