These rules can be applied to trending markets. In a trendless market, such lines will be curved. A trader’s attempts to smooth out these curves manually usually lead to a loss of a useful signal. 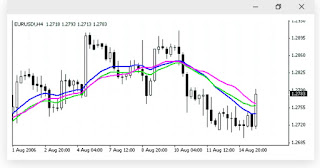 You can see three types of moving averages on the chart. The crossover of the market price and the indicator at the bottom gives a buy signal.